Life in Black and Gold 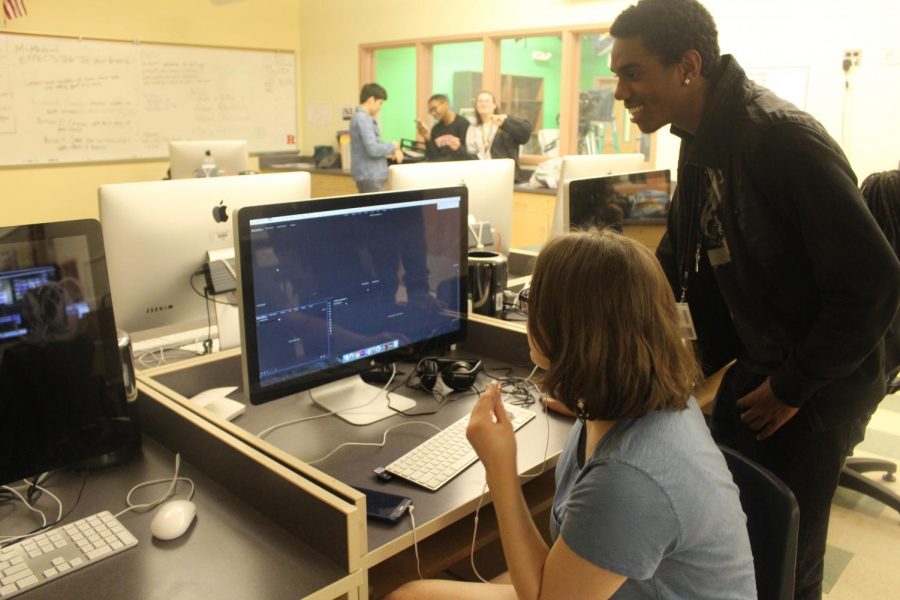 The Kardashians film their lives from top to bottom. Through just 30 minute episodes, the world is infatuated with the daily dramas and petty conflicts that characterize their appearance on the big screens. But despite the gigantic difference between the widespread fame of the Kardashians and the much smaller effect of Pway TV’s Life in Black and Gold, Piscataway High School now has the chance to contribute to their own reality TV show.

Life in Black and Gold is a monthly news recap devised by the Pway TV club that captures the programs and events that go on at Piscataway High School.

It’s origins go back to 2007-2008, when the show’s precursor, the daily morning report was a standard part of what people watched during homeroom each morning. The TV’s that had long been installed in every classroom allowed the students to watch the daily news report.

It was after the TV’s were removed that Life in Black and Gold was born, in order to create a brand-new news concept that the students would enjoy. Since then it has continued to deliver coverage of the day-to-day lives of Piscataway High School students.

Mrs. Pascullo, the adviser for the Pway-TV club, states, “It’s basically a news magazine program, it’s kind of like 60 minutes where you have a bunch of different little news packages or stories [that] the anchor people have to tie all together. And it’s all based on what’s going on at Piscataway High School.”

Just like most news programs, the show has two hosts who deliver the news and introduce different segments that either highlight a sport, the recent events at Piscataway High School, or features a club specially chosen for the episode. Episode 7 of Season 3 featured footage and reporting on the recent Broadway Cabaret Show, The PHS Theater Production Workshop, the prom fashion show, and a sports spotlight for football. Despite the large amount of work that has to go into each episode, the entire show is run by the students.

Senior and vice president of the Pway TV Club Shane Cooper, states, “When it comes to editing a segment we only need one person. When it comes to directing or filming a segment we usually need two or three people. Sometimes if it’s for a big event like the talent show or the heat show we need three people [but] if its something that would be hard to get or something that’s not really pertinent at the moment then we don’t do it. We choose but we try to do everything.”

Cooper, who joined the TV club in his freshman year due to his friend’s decision to join, is now the co-president of the club. He states, “I expected to just do acting but I ended up doing editing, camera work, [and] directing.”

Other students who are apart of the club reiterate this as well, such as former president of the club, Danny Allen, “In the club, you learn to do so many things. You come here thinking you’re only going to do one thing but you end up doing multiple things. I can edit if I have to, [and] I’ve script written before. I’m definitely much more comfortable behind the camera.”

The Pway TV club use the Canon XA20 and XA30 to film events in Pway, and they edit their episodes using Adobe Premiere Pro, After Effects, and Photoshop. However, because many students don’t watch the news reports or short films, the hard work and dedication the TV club puts into their productions often goes unnoticed. Despite this, Mrs. Pascullo believes that the students have started to show more interest in the show and will continue to more and more over time.

“We have social media. I think that’s the key to reaching the students,” she states, “We get about 800-1,000 views for each show, and it’s getting more and more each time. We need to get better marketing slowly but surely.”

For the Pway TV students themselves, they not only gain experience as production managers and camera crew staff, but also gain early access to college classes through Mrs. Pascullo’s agreement with Rider University. Rider is a private University in Mercer County that, through its arrangement with Mrs. Pascullo and the school, allows students who get at least a B in two of the videography courses offered at PHS to gain 3 college credits that go directly to their credits at Rider University, if they choose to go to that college.

One of those students is Danny Allen who is at Rider University for film making, TV, and radio.

“It costs $100 instead of thousands of whatever it costs for three credit classes,” Mrs. Pascillo explains. “If they enroll in Rider they can just go right into the next class, they don’t have to take the intro class, but they can also just pay the $100, get the transcript, go to any school they want, and if that school will accept credits from Rider than they can get that also.”

From filming experience to college readiness, Life in Black and Gold serves many purposes that all help to bring our school together.

“It’s not just to cover the news,” Mrs. Pascullo asserts. “It’s also to highlight people and different aspects of Piscataway High School that we’re really proud of, like the diversity of the school [and] how everyone gets along. We know that this show goes out to the community [and] we can show that visually.