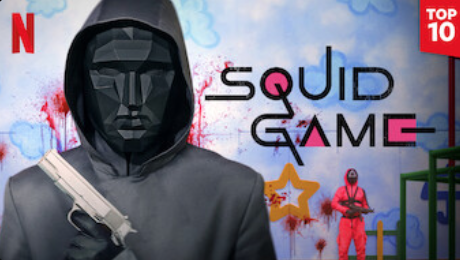 The display icon for Squid Game on Netflix.

Squid Game, a popular Netflix series, is about several contestants playing in several children’s games for money that could pay off their debts and give them whatever their heart desires. Granted of course, if they win all the games. It is soon revealed that losing these games costs a lot more than just unpaid debts and instead has you pay with your life.

The show has blown off the Netflix view charts in less than a month since its release. People from all over the world are watching it and as of October 11, 2021, it is the most-watched show in most countries and is the most-watched show on Netflix overall. The fact that it’s a Non-Western show makes this achievement even greater.
But why are people watching it? Why are there so many calls to watch this series?

Well, there are several reasons, good cast choice, rising popularity for South Korean shows and movies, good advertising, the list could go on forever. Although, there is a major reason why people watch this show: the message.

The message is, in the simplest of terms, a critique on Capitalism and how unfair the system is despite everyone saying that it is “fair.”

Now, this isn’t the only message in the show, there are themes about how American Imperialism has affected South Korea greatly and the scary amount of apathy one has when others are faced with unfortunate situations.

This message, though, sticks out the most, and frankly, also circulates through the other themes as well.
Throughout the show, we see all of the main characters go through trials, all for the sake of winning money. Several of these characters sabotage several other characters and experience a huge amount of moral decay as the show progresses. All that betrayal and more just so that they can have enough money to make their lives better.

Honestly, if you look through each of the characters, you notice that their lives are incredibly terrible and truly cannot get better unless they have enough money to get ahead. Everyone in the series all needs money. The only exceptions are the Squid Game VIPs and all of them are betting on the people playing in the game.

On the surface, it seems like it is just a bunch of people betting on others as if they are replaceable and just collateral damage. If you really think about it, people already do that when it comes to the corporate world.

Looking at today’s structured society, there is already the metaphorical betting of people when it comes to low-level factory jobs. They are pushing themselves to the limits for the sake of their own needs, in which case money. To society, those workers are expendable, much like the players in Squid Game.

There has also been the “dog eats dog” mentality shown in Squid Game in the terms of elimination of contestants. This can be done through them being killed in the games, sabotage, or murder. The more contestants killed, the more money is added to the prize. One can compare that to the endless competition in Capitalism where getting to the top sometimes means throwing others under the bus.

And then there is the final message of how there is almost no fulfillment in becoming stupidly rich. For example, due to the VIPs being attached to their money, the solution to that is to make a game where poor people compete in order to gain money. This parallel can already be seen in several billionaires/millionaires today where they have so much money that they do not know what to do with it. And the things they do come up with are usually actions that benefit themselves and not the betterment of the general population. An example being Jeff Bezos making a rocket ship and taking a short trip to space for fun and Elon Musk soon taking up that challenge as well and now the both of them have a rivalry over spaceflight.

In conclusion, Squid Game is a critique of Capitalism and the effects it has on the people. It calls out on the mentality of gaining more and how in the system itself, everyone loses in the end. Whether it’s from just not having enough for an enjoyable or even livable life or having too much that you turn to watching people suffer for your own entertainment or just throwing your money at useless things that mean nothing to you.