The Book of Boba Fett: A Mysterious Star Wars Character Has His Secrets Revealed

Fan favorite bounty hunter returns to the screen, but is this “book” worth reading? 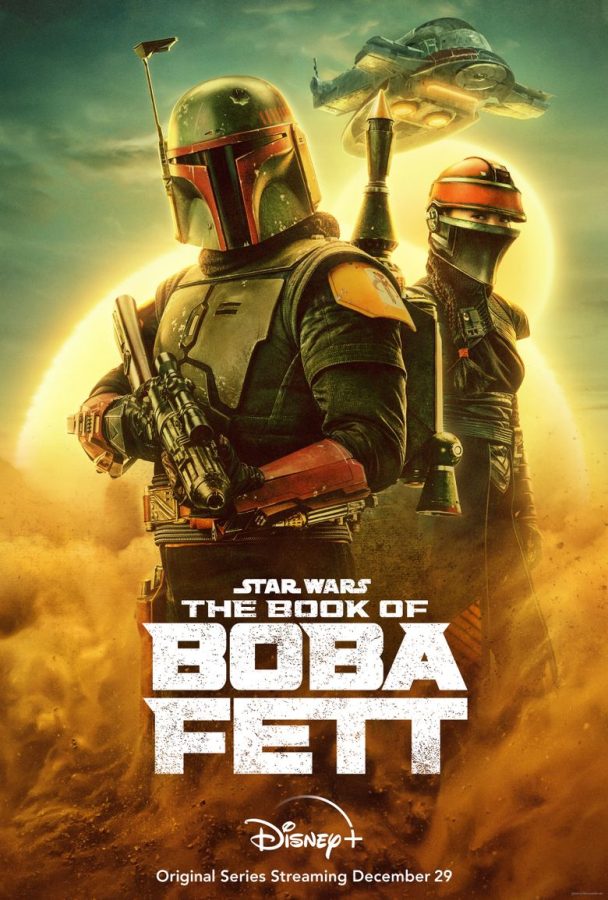 A franchise dating all the way back to 1977, Star Wars is still a huge success and continues to produce new movies/ shows. The latest show being The Book Of Boba Fett, which is now streaming on Disney +. Now that the first season has come to an end, it’s a great time to discuss the show and compare it to the one prior, The Mandalorian.

The Book Of Boba Fett came out on December 29, 2021 and ended on February 9, 2022 with 7 episodes ranging from 30-60minutes. The show was about a very well known character in the franchise, Boba Fett. To quickly summarize what the show is about, Boba Fett alongside mercenary Fennec Shand go back to the sands of Tatooine (Luke Skywalker’s home planet) to take the territory formerly claimed by Jabba the Hutt. Parts of the storyline take place after Boba escapes the Sarlacc Pit, where he had fallen in Return of the Jedi, and is now trying to get back on his feet. The star of the show (Boba Fett) is played by Temuera Morrison, and Fennec, his sidekick, by Ming-Na Wen.

With the show having a 66% on Rotten Tomatoes, it’s safe to say the show was liked by many people. Personally I enjoyed the show but I will admit there were times where I was a bit bored or confused. I am not the biggest Star Wars fan which means I do not know all there is to know about the show. Even though I don’t know so much about it, I still think the show was entertaining. My opinions/ thoughts were mostly made comparing The Book Of Boba Fett to The Mandalorian. The reason being is that The Mandalorian is what introduced Boba Fett and told fans that Boba Fett was getting his own show. Both shows are very similar considering they are in the same timeline and have some of the same cast.

However, compared to The Mandalorian, Boba Fett didn’t seem as exciting. There are a number of reasons that could explain why this show felt like it was more of a slow paced show then action packed.

Reason one: The show focused more on the backstory of Boba Fett’s return than the present day. With this, most of the show is his memories of the past as he is asleep in a “bacta tank”. The memories mostly consist of either him as a child or his time with the Tusken Raiders, a nomadic desert tribe, after escaping the pits. Keep in mind the Mandalorian was a bounty hunter so his show was action packed with fight sequences and action, but Boba Fett focused more on Boba learning the traditions of a different tribe.

Reason two: the show mostly takes place in the same town. Tatooine is where Boba Fett killed and replaced Jabba the Hutt’s attendant, Bib Fortuna, so it does make sense for the show to be there. Even though the show made sense being in Tatooine a lot, it got old fairly quick and also a bit repetitive. For a franchise like Star Wars, it’s always nice to see characters explore different places since there are so many planets and galaxies to go to. When you put that in thought, it kind of makes this shows setting a bit underwhelming.

Reason three: This show was less mysterious than The Mandalorian was. When it came to The Mandalorian, the show usually had me at the edge of my seat wondering what’s going to happen next or even what he looked like. Boba Fett seemed to not leave so many questions unanswered which could be a good and bad thing since cliffhangers can be annoying but a bad thing because it doesn’t leave a lot of room for season 2.

Overall, The Book of Boba Fett, was a great show on its own but personally couldn’t compete with The Mandalorian. The show brought back many old characters and had a storyline that was interesting enough to make you want to watch the next episode. The show definitely has potential for a second season and I look forward to that release date.